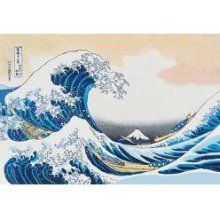 "The Great Wave of Kanagawa"

Just call me the reluctant dragon.  Reluctant because I am, and dragon, because I’m pretty sure my husband sees fire coming from my nostrils when I get like this.

You see, a very wonderful thing has happened: my husband has been given a shot at his dream to be a small business owner, which means we’re moving.  I’m excited on all levels. Excited for him, for us, for the opportunity, for adventure, even to move.

However, I find myself playing the role of the “Brooke, the Hesitant” as we began discussing plans for our departure.

My husband is a plunge-forward-think-later kind of guy. He does cannonballs into the pool without testing the water. When we were out in Los Angeles before I even met him, I heard stories of him diving into the Pacific Ocean in March. The guy is nuts! I can only explain how he ended up with me by saying it must be an “opposites attract” sort of thing.

Naturally, I do not even entertain the idea of plunging into the Pacific in March. I am one of those people who sticks her big toe in, shrinks back, and then paces on the pool deck for about ten minutes gathering courage (or debating the idea) to jump in. And sometimes I don’t even jump! I get in the shallow end, feet first, inching along until my legs are numb, then waist, then belly and on and on.

I’d probably spare myself some agony if I had just jumped in like him. Although sometimes, I think he wishes he had tested the water.

So maybe someday, somehow we can meet in the middle.

Is today that day?

I sure hope so because I don’t really feel like getting pulled into the Pacific Ocean head first, and I know we can’t sit on the beach!