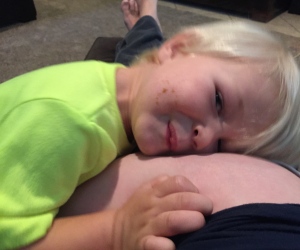 A sticky faced two year old and his little sisters. Lee has been enjoying actually feeling the babies move. It’s the cutest thing. 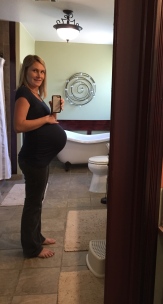 Here are some pics from today. 28 weeks and 4 days. I had my perinatal doctor appointment today and everything looks good. Babies are weighing in at 3 lbs (A) and 2 lbs 14oz (B). (I often wonder how accurate these measurements really are, but I guess we will see.) That means there’s about 6 pounds of baby already in there, with probably another 6 pounds of baby to gain (!!!)–not to mention fluid and placenta growth! Hard to imagine.

So far week 28 has been rough. Last Thursday when I actually changed over to my 28th week, I was super duper tired. Like someone had just hit the off button. I laid in bed most of the day while the kids did who knows what downstairs. Cartoons I think? I could have gone to bed at 7 p.m. that night but I made myself stay up till 8. Going to bed before 8 o’clock at night just seems wrong. (Although my husband wouldn’t bat an eye at that–he’s a good man, and he likes his sleep).

Friday I didn’t fare much better. I had really bad heartburn in the morning (which subsided a bit thanks to Tums and a visit from my friend Shannon). But it turned into horrendous heartburn by about 1:00. Probably after I had eaten half a PBJ. I could get no relief. Tums did not work. I asked my husband to bring home Maalox, which didn’t help either (and have since learned should not be taken after you’ve taken tums–yuck). Then I called the doc to see what else there was to do. For probably 2 hours, I could get no relief. Constant literal heart burning, chest pain, and stabbing pains in my back and sides. On top of which I started to come down with some virus because I was achy, chilled, hot, just plain miserable.

When my husband came home Friday night to the kids running wild downstairs and a disaster of a house he walked into our room where I was incapacitated with pain, took off his tie and said something like, “Holy cow. So this is what it would be like.” I gather he meant, this is what it would be like if I were sick all the time, or on bed rest, or basically didn’t do my job as a parent. I guess it made me feel a little better that he noticed all the things I usually do, because not one of those things had been done. All. Day. Long. And our house showed it. No dish had been put away, no toy picked up, not a crumb swept.

Anyway, long story short. The weekend was horrible for me. I was in bed for a day and a half straight. Weak, feverish, exhausted. Thankfully the heart burn had subsided, but I was now fighting this virus. Darrell, however, was the hero of the weekend. Making french toast for dinner two nights in a row (his specialty), did ALL the laundry (and there were loads of it), treated the kids to a movie and popcorn at home, and even took them to a reptile show on Sunday…where it just so happens they bought a baby corn snake. (I think I am crazy to have let them do that, but they have worn me down. And there are stipulations. AND we can take the snake back if it doesn’t work out. That’s straight from the mouths of the snake-selling tattooed hipsters who sold it to a 6 year old and his enthusiastic dad.)

Now, here we are on Monday. I am thankfully much better, but still don’t have my energy back. My walk from the car to the doctor’s office wore me out! (Boohoo!) I guess that’s what two days of bed rest will do to you. (And little food). The heart burn situation, I fear, is not totally under control. Feeling pretty nauseous even as I write this. Nothing really sounds good to eat. Plus, I’m worried I’ll eat something that will make my heart burn again, and yet if I don’t eat that only makes it worse. I know what I am supposed to do now, and will be taking Zantac twice daily for the rest of my prenatal life. And to think, that’s only about 8 more weeks! (Sigh). In one sense that feels like forever, and in another sense not nearly enough time. There is still lots to do!!

Well, I guess that’s it for now. Even though I may be a wreck, thank God the girls are doing just fine. Moving around like crazy and growing just like they should be.

2 thoughts on “My Heart Burns for You–Literally”